Please watch and share this incredible documentary film. The film has been made by Coastal First Nations – a coalition of aboriginal groups – and tells of their efforts to end the grizzly trophy hunt on British Columbia’s central coast. Don’t forget to sign the pledge to help at the end of the film.. 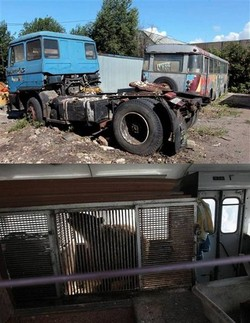 The Winton Foundation for the Welfare of Bears would like to lend its support to the worldwide campaign gaining momentum to free Katya, the forgotten circus bear currently held in a tiny, dark, dirty and smelly cage on the back of a bus in a car park in St. Petersburg, Russia.

Katya was used to ‘entertain’ spectators in a circus during the 1980 Moscow Olympics and since ‘retiring’ has been held captive for two years in the back of a bus receiving only minimal care in her cramped and stinking cage. The aging and ailing bear now spends hour upon hour going demented in her cage jumping up and down and trying to break free. The bus becomes swelteringly hot during the summer and she can’t move normally or exhibit any natural behaviour.

Katya’s distress is plain to see in this video:

The latest updates we have received from Alertis are as undernoted:

Katya would have turned 46 years this April (2020), which is very old for a bear (or any other animal kept under such conditions).

Jan 2016: Over the past year Alertis have tried to get in touch with the circus people and Katya’s owner several times, but they never received any reply and the phone seems disconnected. There is no way to reach out. We assume the worst and bear Katya has passed away.

2014: The City of St. Petersburg launched an ad campaign to attract more Western tourists to St. Petersburg. They wanted to get rid of many stereotypes, one of them being that bears wandered the streets of the city. Since about that time Alertis have not received any more alerts from there – there have been dozens in the past. Let’s hope this marks an end to captive bears being abused and taken to the streets to entertain ignorant tourists!

Sep 2013: Alertis spoke with Katya’s owner and the circus people again. We discussed the possibility of moving Katya from the enclosure in the bus to a shelter near Moscow where several other bears are being kept. This shelter would be willing to take Katya with Alertis’ support. Sadly, Katya’s owner did not agree to her bear being rehomed as she felt Katya might not survive such a radical change. Also, it became clear that the owner is not really willing to part with Katya. We feel that this might well be the end of this tragic story and that Katya, who turns 40 next year (2014), will die of old age in her small confinement in the not so distant future…

End the use of bear skin pelts in the British Army

Every year in North America, thousands of bears are hunted and killed for their fur. The hunting process is violent and cruel and often bears that are not killed outright, will die slow, painful deaths from their wounds or from starvation. 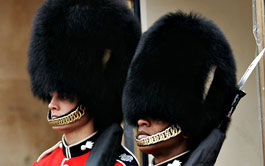 Bear fur is still used today in bearskin caps worn by The Queen’s five regiments of foot guards and every cap can take the entire skin of a bear. According to the UK’s Independent newspaper, “The Queen’s five regiments of foot guards need between 50 and 100 new caps every year. In March 2009, it was revealed that the Ministry of Defence has spent more than £321,000 on bearskins in the past five years.” Can the financial cost be justified? We know the cost to the bear can’t.

The caps serve no military or practical function. They are purely ornamental and could easily be made from a synthetic, humane fabric. With so many faux-fur alternatives available that look and feel like the original, it’s time this ‘tradition’ ended or at least became a cruelty free tradition.

The Ontario Ministry of Natural Resources says one in seven hunted bears does not die instantly but suffers a slow and agonising death from starvation, blood loss or infection.

Please write a polite letter to Peter Luff MP, Minister for Defence Equipment & Support House of Commons, London SW1A 0AA or e mail him at peter.luff.mp@parliament.uk urging him to end the use of bear pelts to make the headpieces. 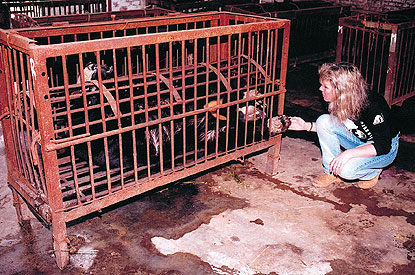 The Winton Foundation for the Welfare of Bears is a staunch supporter of the work of the Animals Asia Foundation to bring an end to the brutal practice of Bear Farming.

In countries across Asia, thousands of bears live a life of torture on bear farms, so that their bile can be extracted and used in traditional medicine to cure ailments ranging from headaches to haemorrhoids. Bears are confined in cages which vary from agonisingly tiny “crush” cages to larger pens, all of which cause terrible physical and mental suffering.

Slaughter of Mother Bear and Torture of her Cubs

An horrendous case of animal cruelty has been brought to the attention of the Winton Foundation for the Welfare of Bears.

The incident took place in Iran and involves the slaughter of a mother bear, with her cubs at her side and the subsequent torture and prolonged mutilation and abuse of her cubs. The mother bear was killed and the two 3 month old cubs were stabbed in their abdomens. The cubs were then subjected to further shocking and abhorrent treatment while still alive despite their intestines spilling out of their sliced open stomachs. One of the cubs is then thrown on the rocks, crying in pain and distress and tries to crawl to his dead mother for comfort.

We have been advised that one of the men responsible for inflicting this cruelty has been identified as Hamzeh ali Ansari a teacher in Samiram, State of Isfahan, Iran.

We have been informed that Hamzeh is apparently known to be a very cruel hunter that inflicts unnecessary pain and suffering on animals and has more than 100 felony and misdemeanour charges against him.

Some reports circulating, indicate that the cubs were killed deliberately slowly due to a belief in Iran that cutting out the intestines of a slowly dying cub will have healing properties for those who consume them. Filming this action, would apparently provide the proof that this has been done.

We urge as many people as possible to write to the Iranian Embassies around the world urging them to investigate the matter without hesitation and to ensure that any individual or group inflicting this level of animal abuse are given the strongest penalty.

The following links show the incident and give additional information. Please be warned that this is very shocking and disturbing footage.

Iranian Embassy e mail addresses are as undernoted. Please do keep us informed of any replies you get.