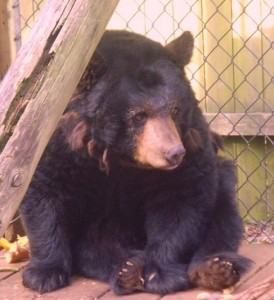 The Winton Foundation for the Welfare of Bears has pledged to help raise funds for a very special little bear called Grace who is currently a Special Care Permanent Resident at Woodlands Wildlife Refuge in New Jersey, USA. Grace suffers from a condition called Osteodystrophy which means her bones have developed abnormally, resulting in little stumpy legs.  Sadly it is also thought that Grace is blind.

As Grace has aged, her physical and visual capabilities have begun to decline and she is troubled with osteoarthritis. As she moves into her senior years, we would like to help contribute to the costs of her medication and daily care costs and any enclosure enrichment that would benefit an elderly lady with her special needs, to help keep her as comfortable as possible. 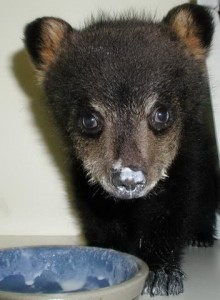 Grace arrived at Woodlands as a 1.8kg (4 lbs) orphaned black bear cub in 2001. The reasoning for her being abandoned was unknown. This tiny cub did well in care and shortly after her arrival had another cub to grow with.  At 11 months it was apparent that Grace was different. There was a marked difference between the progresses of the two bears being raised together. As her cage mate continued to grow, Grace did not. It became obvious that Grace’s genetics were not that of a normal bear. Because of her small stature and other anomalies, it was determined that release into the wild would not be in her best interests.

Grace’s enclosure offers her opportunities to climb, den and wander. During hot weather she enjoys sinking her whole body into her water tub. She is often seen putting her face in the water and blowing bubbles. When there are other bears in the enclosure near her she often “sits” and watches them. From time to time bluff charges are exchanged as Grace asserts herself as the “matriarch”. She is a mild mannered bear that prefers to keep her distance but doesn’t mind daily visits from her care givers. She is always eager to get her daily serving of dry dog food and a wide assortment of fruits, vegetables, greens, nuts and special treats. She is known affectionately as Sweet Grace due to her mellow and content manner.

To donate to Grace’s appeal fund, simply click on the donate button below which lists the various ways you can give. Please mark any donation ‘For Grace’.

The Grace’s Appeal Facebook page can be found at https://www.facebook.com/GracesAppeal.

It is with great sadness that we received the news that Grace had died on 9th October 2014. It was an honour to take her under our wing for the last year of her life and help Woodlands Wildlife Refuge in their wonderful care of such a special bear. In winter 2016 we made a further donation to Woodlands Wildlife Refuge in memory of Grace, funding the cost of a webcam and 4 boomer balls for the new cubs in their care at that time. 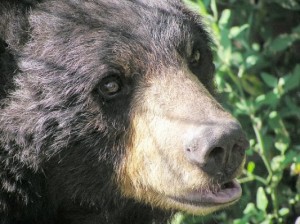 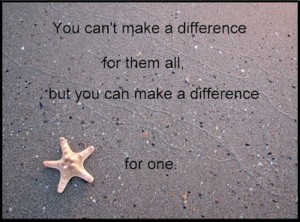